CNN: Cathartic acts of rage, or the rewriting of history? How statues became political lightning rods

PEJOURNAL – Statues are products of one era built to endure into others. They loom over streets and squares while the views of those who pass by change, from generation to generation. Most people, most of the time, are indifferent to these persons of stone and bronze. Not now.From Richmond, Virginia, to Bristol in England, statues of men who championed or traded in slavery centuries ago are being torn down. The soul-searching about race prompted by the death of George Floyd in Minneapolis has extended into how the history of racial persecution and prejudice is remembered. It is a heated debate that reaches far beyond the legacy of slavery.Statues of the Confederate Gen. Robert E. Lee in the US and the 17th century British slave-trader Edward Colston were obvious targets for anti-racism protesters. So were those of King Leopold of Belgium, who presided over the most atrocious cruelty in Belgian-run Congo in the late 19th century. His statue in Antwerp was set on fire and doused in paint last week.Few today would defend commemorating or honoring figures like Colston or Leopold. They profited from cruelty and persecution, and hundreds of thousands of Africans died in the process. 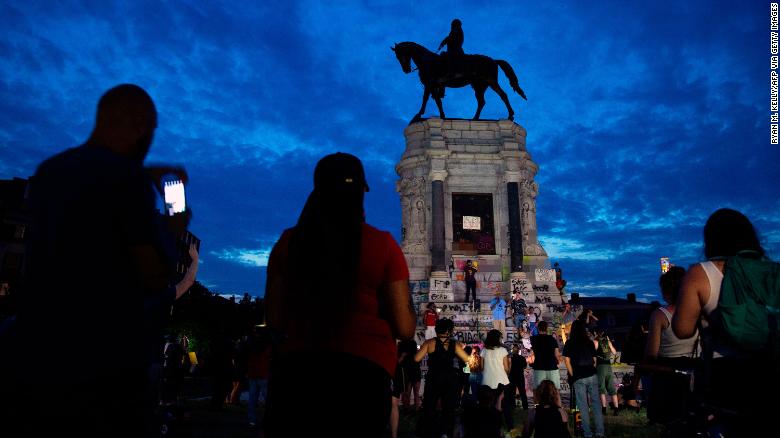 Similarly, there are moments in history where destroying icons has been part of a popular urge for liberation. During the 1956 uprising in Hungary, crowds tore down the huge bronze statue of Joseph Stalin, a gift to the Soviet leader on his 70th birthday. In 2003, Iraqis toppled a statue of President Saddam Hussein in Baghdad, helped by US Marines.But most historical figures are not so easily categorized and condemned. Now British wartime leader Winston Churchill and Italian explorer Christopher Columbus are among those in the cross-hairs of some protesters.Churchill’s statue in Westminster, defaced with the words “was a racist” last week, was covered up ahead of this weekend’s protests. British Prime Minister Boris Johnson, who wrote a biography of Churchill, was furious — saying on Twitter that his predecessor was a hero and had saved “this country — and the whole of Europe — from a fascist and racist tyranny.”Johnson acknowledged that Churchill had “sometimes expressed opinions that were and are unacceptable to us today,” but said he was averse to tampering with history. 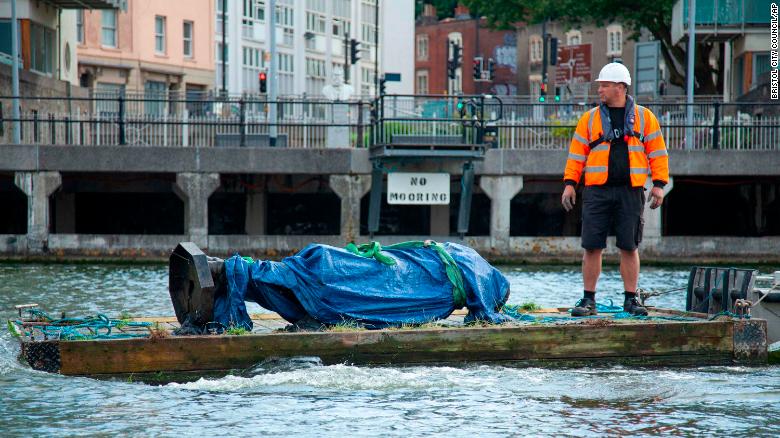 “The statues in our cities and towns were put up by previous generations,” he tweeted. “They had different perspectives, different understandings of right and wrong. But those statues teach us about our past, with all its faults. To tear them down would be to lie about our history, and impoverish the education of generations to come.”American comedian Trevor Noah has a different take: “The bubonic plague was a major event in history, but we don’t go around putting up statues of rats,” he wrote.Setting aside the likes of the nurse Florence Nightingale (whose statue lies not far from that of Churchill), most of the great figures of the past are not beyond reproach — especially by today’s standards.Robert Shrimsley wrote in the Financial Times: “Many great historic figures carry serious baggage. George Washington and Thomas Jefferson owned slaves. Where does the historic cleansing stop?”Most would probably agree that Churchill led resistance to the Nazis heroically, but some remember him also as a white supremacist. In 1937, when addressing the fate of indigenous peoples in Australia and America: “I do not admit that a wrong has been done to these people by the fact that a stronger race, a higher-grade race, a more worldly wise race to put it that way, has come in and taken their place.” In the United States, statues of Columbus have been damaged or torn down by protesters in the past few days because of his brutal suppression of indigenous people when exploring the New WorldIn Richmond, Virginia, the local Indigenous Society tweeted: “Christopher Columbus was a murderer of Indigenous people, mainstreaming the genocidal culture against Indigenous people that we still see today. ” But the governor of New York, Andrew Cuomo, has resisted the removal of the Columbus statue in Manhattan, saying he understood “the feelings about Christopher Columbus and some of his acts which nobody would support, but the statue has come to represent and signify appreciation for the Italian-American contribution to New York.”There is a substantial difference between honoring titanic figures, despite their sins and prejudices, and honoring others — such as those who wanted to perpetuate slavery — because of what they did. Referring to statues in the US Capitol of Confederate figures, the Democratic leader of the House, Nancy Pelosi, said they “pay homage to hate, not heritage.”

There’s another argument about memorials to controversial figures: that they encourage extremism and violence. A distant descendant of General Lee, the Reverend Robert W. Lee, said this week that the general’s statue in Richmond had become an idol of white supremacy and should be removed.It was plans to remove another statue of Lee that provoked white supremacists to descend on Charlottesville, Virginia, three years ago for the “Unite the Right” rally. It was the third such rally that year and led to widespread clashes in which one person was killed. A statue had become a political lightning rod.On Saturday, Churchill’s statue opposite the Houses of Parliament became a rallying point for far-right protesters who came to “defend” it — and look for a fight with Black Lives Matter activists. As British comedian Danny Wallace noted in disbelief: “The man who stopped us all from having to salute like a Nazi is celebrated by men doing Nazi salutes.”In Italy, dictator Benito Mussolini’s crypt in the town of Predappio has seen annual pilgrimages by the far-right, just as far-right activists in Spain were drawn to the mausoleum of Francisco Franco before his remains were moved last year.By contrast, West Germany moved in 1949 to banish any remembrance of Nazism. Swastikas were criminalized, statues and monuments destroyed. Executed Nazis were buried in unmarked graves so they would not become Nazi shrines. Even monuments to the war dead were forbidden.A new generation of German politicians was taking the first steps towards a democratic era. But it took another generation for a full reckoning with the horrors of Nazism to take place.

Rather than demolish, there are ways to reimagine statues as part of history. The statue of Colston was retrieved from the River Avon to be put on display in a museum, where his true role will be detailed. The spray-paint and rope-marks that preceded the statue’s immersion will not be removed, and it will be surrounded by Black Lives Matter placards. Rather than history being erased, another layer is being added, which will probably educate future generations about the horrors of slavery in a way the statue never could before.Responding to demands for the removal of a statue of British imperialist Cecil Rhodes in Oxford, the university’s Vice-Chancellor Louise Richardson said “that hiding our history is not the route to enlightenment.” But she added: “We need to understand this history and understand the context in which it was made and why it was that people believed then as they did.”The Mayor of Louisville in Kentucky, Greg Fischer, has been trying to get a statue of a Confederate soldier removed for two years. Not to erase history, he said, but because moving these statues, “allows us to examine our history in a new context that more accurately reflects the reality of the day, a time when the moral deprivation of slavery is clear.”

A week ago a local judge agreed with the mayor, and the statue was removed.Rome has plenty of monuments and buildings from the fascist era, some of them architectural masterpieces. One of them is the former home of the Italian Youth of the Littorio, inaugurated in 1937 to celebrate Mussolini’s brutal colonization of Ethiopia.Inside is a massive map of the cities and territories seized, along with a big “M” for Mussolini. Last year a group of artists painted questions across it: “Is my skin a privilege?” “Who is civilized?” “Is white a neutral color?”History is much more complex than carvings that remember a handful of influential men, mute monoliths above a plaque of few words. But democracies work by consensus: If anyone can simply demolish any public monument they choose it denies us, and more importantly later generations, the chance to learn from history. Colston was a towering figure in Bristol. In the words of its Mayor, Marvin Rees, who is black: “As a city we all have very different understandings of our past. The only way we can work together on our future is by learning the truth of our beginnings.”

PEJOURNAL - Recognition of Aktion T4 as the most significant systematic massacre of the disable...